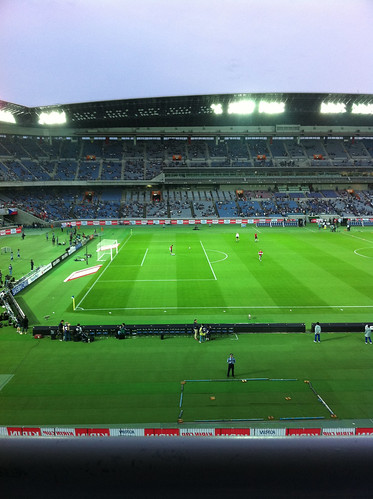 Granted the 2011 Kirin Cup only featured three teams and three matches, but it seems unlikely that any other tournament in international football history has offered so little entertainment.

Few Japanese fans would argue against the opinion that the Unofficial Football World Champions were poor in both of their matches, and can consider themselves lucky to still be in possession of the UFWC title. Peru looked to be the best team in the Kirin Cup tournament, and, on the evidence of today’s match, the Czech Republic were the worst.

In a fairly even match, Japan had the handful of better chances, and could have won if not for a very good performance by Czech Republic and Chelsea goalkeeper Petr Cech. Makoto Hasebe shot just past the post for Japan, and Yasuhito Endo’s curling free kick was tipped over the bar by Cech as half-time approached.

In the second half, Maya Yoshida headed over from inside the six-yard box, and then Cech pulled off a brilliant double save, first beating out Shinji Okazaki’s close-range header, and then clawing away Tadanari Lee’s follow-up volley.

For the Czech Republic, Michal Kadlec and Tomas Sivok both had half-chances but failed to find the net.

The odd post-match press conference hinted at the reported rift between coach Alberto Zaccheroni and his players. ‘Nowhere in the world could a team improve as much in so little time as we have,’ said Zaccheroni, who had apparently been watching another match. ‘This team has tremendous potential.’

Acting captain Hasebe was much more realistic. ‘We were poor,’ the Wolfsburg midfielder said. ‘I apologise if we were boring. If we can’t beat teams like this at home we won’t scare too many of the world’s top teams.’

So what’s the next challenge for Japan? A friendly match against South Korea on 10 August should be a tougher test for the UFWC champs, although the Koreans are only one place above the woeful Czechs in the FIFA rankings, with South Korea placed 31st against Japan’s 14th.

But Japan vs South Korea is always a massive game – the last time they met was the epic Asian Cup semi final in January that was 1-1 at full-time, 2-2 after extra-time, and 3-0 to Japan on penalties. South Korea have only ever won one UFWC title match, but with Japan having failed to win since January and having stumbled on as champions via draws, anything could happen.